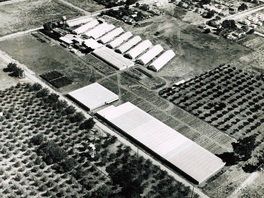 My father, Fred Tsunezo Yonemoto was born on December 11, 1912 in Colma, California.  After his birth, the Yonemoto family could buy land and invest in permanent structures such as green houses and a boiler.  Fred was the first in the family to be born in the United States and thus could purchase land.  His father, his mother, and his older brother were all born in Japan and were prohibited by California law from owning land.

Parcel by parcel the family continued to expand until by 1941 the nursery consisted of 20 acres, 12 greenhouses, 2 homes, and a boiler plant.

The T. Yonemoto Nursery grew asters, giant zinnias, chrysanthemums, and, of course, carnations.  There was even a Sunnyvale strain of giant zinnias.  At Colma, Tsunegusu Yonemoto raised field flowers, but at Sunnyvale he was soon able to raise more profitable flowers in heated greenhouses.

(The family was proud of its post office box number 2.  Kiki, my oldest brother, insisted that we keep the box number until Fred's death in 2007, even though the nursery was sold in the 1970s.)
Early History 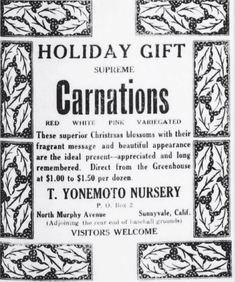 In the early period my grandfather was helped by his two older sons, Jiichiro and Fred.  My father remembered opening the greenhouse vents before he went to school in the morning.  After school, he helped with the watering and cutting the flowers.  Jiichiro, who was 10 years older than my father, is shown in the early photos helping with the construction of the greenhouses.

In December 21, 1923 the Yonemoto Nursery placed the following Christmas ad in the Sunnyvale Standard, the local newspaper.  The nursery seemed to have been prospering.

Fred recalled that the 1930's were especially prosperous times for the nursery.  He attended San Jose State College from 1933 to 1935, but had to leave before he got his degree because his father insisted that he was needed at the nursery full-time.  By 1941,Tsunegusu who was in early 60's was retired.  In his statement to the U.S. authorities, he said that Fred ran the nursery and gave him $50 or $100 a month for spending money. 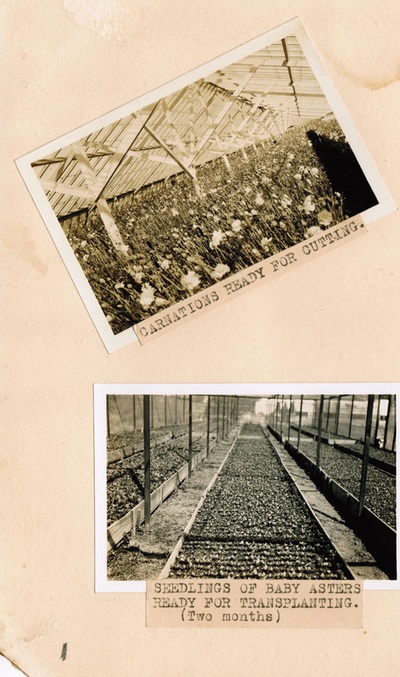 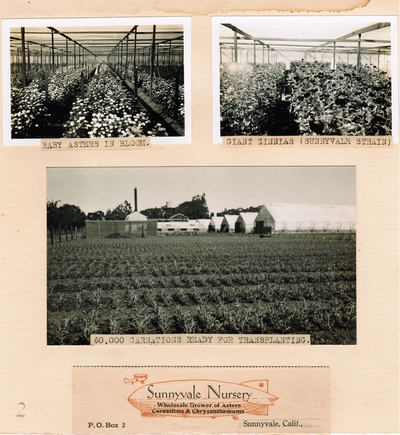 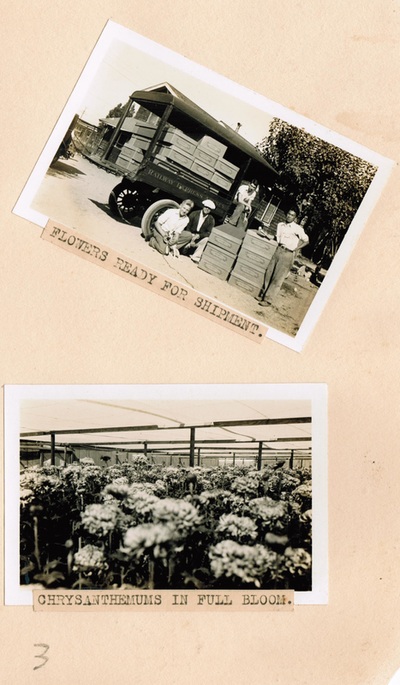 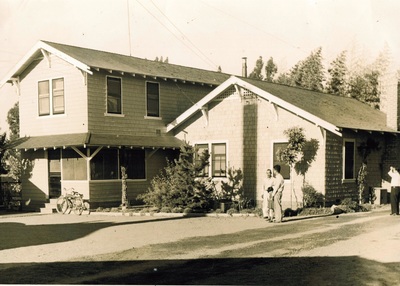 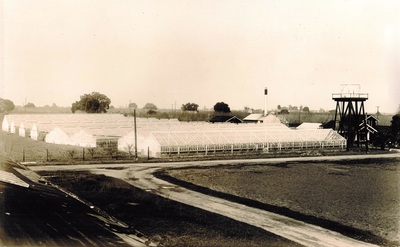 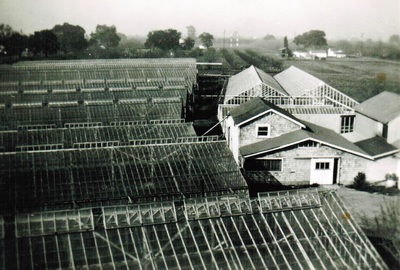 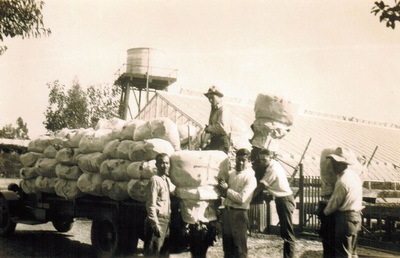 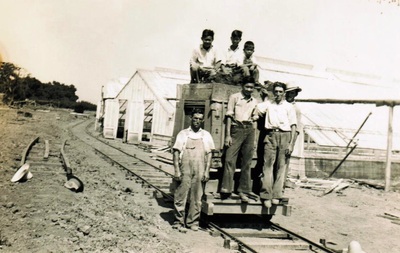 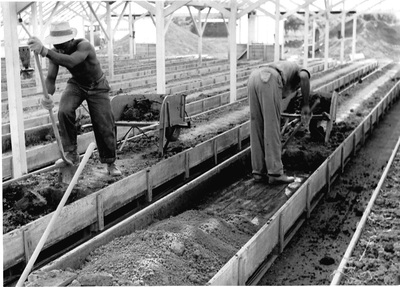 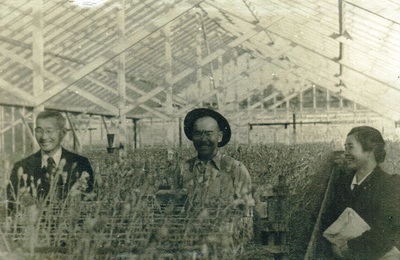 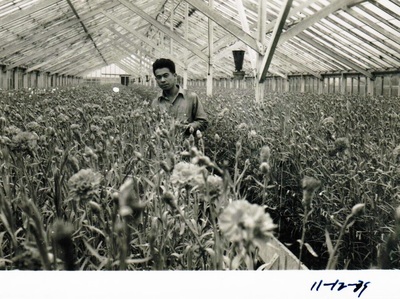 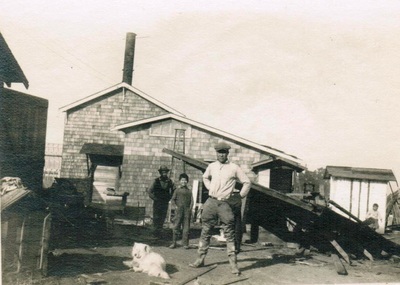 Jiichiro at work
Traumatic events and the war years
On November 3, 1941 Jiichiro and his children left to take his late wife's ashes to her family in Japan.  She had died in September.  On December 7, 1941, Japan attacked Pearl Harbor.  On February 13, 1942, Tsunegusu was arrested by the FBI at his home.  In May of 1942, the rest of the Yonemoto family was evacuated to the Santa Anita Assembly Center.
1940's probably would have prosperous for the nursery.  Fred's account book shows, for the first three months of 1942, an income of $7,458.79, of which $5,796.74 (78%) were sales to wholesalers (on account).  William Zappettini, Podesta (later Podesta Baldocchi), McLellan (of orchid fame), and The Emporium were among the familiar names on the list.  Remember these were the three months after Pearl Harbor.  I don't have his account books for 1941 and before.
During the first three months of 1942 payroll costs average $950 a month and including the following workers:  Kenzo Kamei $60, Ruth Nishimoto $70, Mary Nishimoto $60, Grace Nishimoto $24 (one month only), Mrs. Nishimoto $70,  Imazumi $65, Goichi Yonemoto $150, T. Yonemoto $200, Mrs. T. Yonemoto $150, Yoichi Yonemoto $150.  There were other workers whose names appeared for one month.  Strangely enough, Fred's name does not appear on the payroll list. 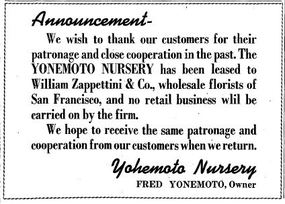 A handwritten note dated May 1, 1942 states "leased the nursery to Wm Zappettini Co for the duration.  The nursery was leased for $200 a month.  In addition, the California Street house was leased to the Foremans for $50 a month.  Leo H. Vishoot, Fred's friend and fellow Rotarian, was hired as the property manager and Fred's eyes in Sunnyvale for $2.50 a month.

On May 8, Fred put a notice in the Sunnyvale Register, the local newspaper, about the arrangement.

Fred, Tsune, his mother, and Tak, his brother, are employed by Zappettini that first month.  (Fred from May 1 to May 8, Tsune from May 1 to May 22, and Tak from May 2 to May 24)
Post War Period
In November of 1945, the family returned to Sunnyvale and to the nursery which had been leased to William Zappettini, Sr. during the family's absence. In 1974, the land in Sunnyvale was sold.  Fred, his wife, and their 2 youngest sons moved to a house in Los Gatos, California.