The Yonemoto family was joined at Heart Mountain by many good friends from Sunnyvale and Mountain View.  But two families who were most important to my family's well-being at Heart Mountain were the Mitarai and the Inouye families.  When I was growing up, my parents often mentioned them.  Occasionally they came to visit from Utah, and once when I was in high school, the family went to visit them in Utah.  But until I began my research, I didn't really know the strength of the friendship.

Henry Mitarai was born in 1906 in the Santa Clara Valley.  At the time of Pearl Harbor, he was 36 with a wife, Helen, and four daughters.  His father-in-law, Sashichi Inouye, lived with them at their farm in Mountain View.  Noted photojournalist, Dorothea Lange, took nine pictures of the Mitarai family on March 30, 1942, just 6 weeks before the family was sent to the Santa Anita Assembly Center.   He is shown with a neatly starched shirt and pressed pants, looking like a prosperous farmer, that he was.

Henry is described as " a successful, large-scale, mechanized farm operator", whose payroll on the mechanized farm ran as much as $38,000.00 a year.  He is shown beside one of his sugar beet fields and his onion field.  One caption noted that farmers and other evacuees of Japanese ancestry will be given opportunities to follow their callings at War Relocation Authority centers where they will spend the duration of the war.
The Mitarai family were sent to Heart Mountain Relocation Center.  Sashichi Inouye's address at Heart Mountain was Barrack 23-6-F, next door to my family's room at 23-6-D.  I could not find a listing for Henry, but he could have living with his father-in-law.  Only heads of household were listed.
I am not sure of the timing, but he was allowed to leave Heart Mountain early on to follow "his calling", which was farming.   The United States needed his help, especially with sugar beets.  Henry and his family relocated to Utah, near the city of Richfield. The Mitarai family stayed in Utah after the war, joined the Mormon Church, and became very successful.
Fred Yonemoto, my father, also applied for indefinite leave from Heart Mountain, but he was not granted permission to relocate until much later for reasons described elsewhere.  However, he was granted several short terms to look for employment and a place to live.  One of the places he visited was Richfield, Utah, the home of the Mitarai family.  Goichi (Gooch), his youngest brother, stayed in Richfield, either working on the farm or going to school.  Yoichi (Tak), another brother, spent time at the farm between school terms.  It was a place of refuge.

Fred's job card
On September 1, 1944, Fred applied to work outside of camp for the War Food Administration as an Interstate seasonal agricultural worker at the rate of $3.00 a day.    He was allowed to go to Richfield, Utah for 2 months from September 2 to November 30, 1944.  Henry Mitarai's farm was near Richfield, Utah.  In the fall of 1944 there was a shortage of people to harvest sugar beets.  Even German and Italian prisoners of war were used for the harvest.
Finally, on September 6, 1945, the Yonemoto family left Heart Mountain for the final time.  After a short stop to look at Old Faithful in Yellowstone Park, the family traveled to Mitarai family in Utah. 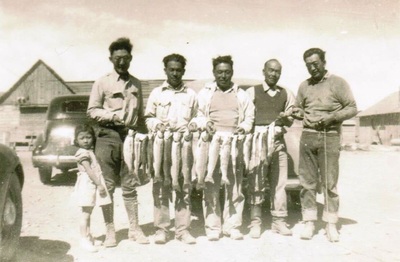 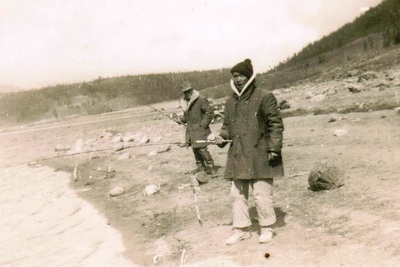 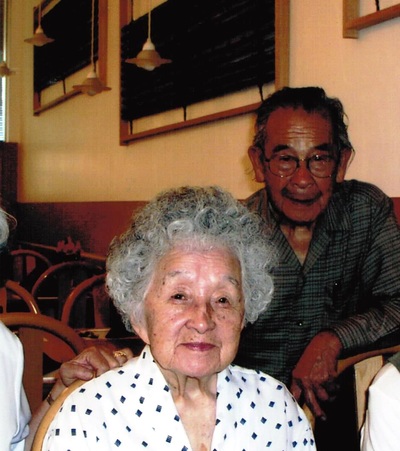 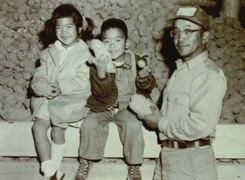 Charlie Inouye with his daughter and son
Charlie Inouye was born on July 1, 1914 in Alviso, California.  He was the son of Sashichi Inouye, younger brother of Helen Mitarai, and the brother-in-law of Henry Mitarai.  Charlie was a graduate of Stanford University with a degree in social sciences and mathematics.  At the time of Pearl Harbor, he was 27 and had his own brokerage business.  He didn't plan to become a farmer, but circumstances led him in that direction.  Farmers were very much in demand during the war years.  Also he had some familiarity with farming.  Both his father and his brother-in-law were successful farmers.  He was allowed to leave camp early to start growing sugar beets in Gunnison, Utah.   Fred, my father, recounted that the United States Army asked Charlie if his family would grow carrots for the Army just as the family did in California.  Charlie said sure.
He was no dummy.
.
During Fred's last interview with government officials, he said that he would like become a farmer near Gunnison, Utah.  He reminded the officials that he already had farm equipment, a pickup, and an International truck, which was brought at considerable expense and trouble from Sunnyvale.  He was desperate to join his friends in the outside world.
Charlie met his wife, Bessie Murakami, at Heart Mountain and stayed in Utah after the war.  They raised 6 children, joined the Mormon Church, and became very successful farmers.  His son, Charles, a professor of Japanese studies at Tufts University, wrote a loving article about his father.  The Deseret News had a long and interesting article about a 2010 Inouye family reunion.

A google search turned up a business in Gunnison called Inouye Potato Pit.  I couldn't determine what kind of business it is, but it certainly has an intriguing name.